Back to where it all began 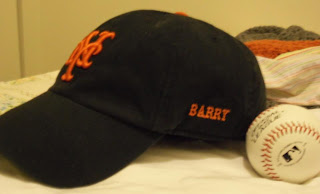 You'll have to forgive me this weekend Giants fans. I may get a bit misty and feel nostalgic. For the first time since the 2010 World Series, the Giants are returning to the park in Texas where they won their first title of the San Francisco era.

I know there's been great times in 2012 and 2014. There might be even more amazing things ahead for this team. But this weekend I'm looking back.

Why? Well it's the only Giants title I got to share with my father. The 2010 team was a culmination of a lifetime love affair with the Giants. It validated all those years I hung around as a fan of this team even though I had never been to San Francisco. My dad was originally from New York and I was raised in the Chicago area. I go in depth about this here if you'd like to check it out.

Seeing the Giants in gray celebrating on another team's field brings me back to always seeing them as a road team in all my time growing up going to Wrigley. Year after year we would head to the park wearing our Giants gear knowing we'd be in a small minority. We never got to make the pilgrimage to AT&T Park until it was too late. You were there with me back in 2013 when I finally made it. We left a lot of you behind in McCovey Cove to let you watch your Giants forever.

I had just moved down here to Florida back in 2010. My father was living outside Chicago. We were on the phone constantly during the series and he was the first person I talked to (outside of Karen, she was in the room with me) after Brian Wilson struck out Nelson Cruz to send us all into delirium.

It was truly one of the last great moments we got to share together. I only saw him one more time and that was shortly before he fell into a coma and then passed away in March of 2012. I've always felt like he hung on just for that trip to Florida to see me. I'm lucky I had that time.

So this weekend while we all are obviously looking forward and the Giants will get to play with their new toy Mike Leake, there will be a big part of me looking back and thinking about the man that made me care about these things in the first place.

This post may be totally disjointed and not make any sense at all. I don't know and I don't care.

Here's to you Barry Nathanson. The reason I am a crazy Giants fan who lives in Florida. You were one of the greatest fathers any son could have asked for. I love you dad and miss you every day. I'll be thinking about you this weekend and hope you're proud of me.