April 04, 2015
This first appears over at TortureCast.com. 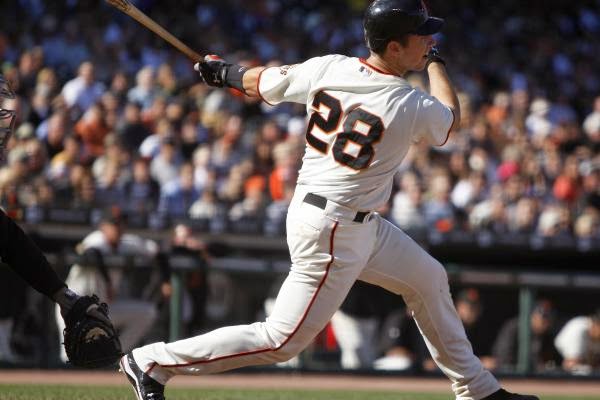 Well here we are. The 2015 San Francisco Giants season is upon us. I thought I’d take this time to preview the season and throw out some predictions. I’m sure you’ve read the “big boy” publications and what they forecast for the season so I’m not going to even mention the fact that none of them are giving the Giants a chance to do big things this season.

I previewed the starting rotation yesterday. Today I’m looking at the starting 8. Well, truthfully, it’s the starting 9. Even though Hunter Pence is out until sometime during April, I’m going to include him here. It’s not like he won’t be back and frankly we all love him.

So here are the starters. I’m not going to go by batting order because Bruce Bochy has already said that he will mix it up. Some days Angel Pagan will hit 3rd, others he’ll hit 5th. I’m going to go around the diamond starting with LF and ending with the catcher position. I’m choosing which stats from last season I want to highlight with each player because, well, I can do that. So sit back and enjoy a look at this year’s Giants starters. All slash lines are batting average, on base percentage, and then slugging percentage.

It looks like Aoki is the new leadoff man. He’s entering his 4th year in the league. Nori is 1 of 2 new starts for the Giants this season. If he’s going to be in that role I’d love to see those walks improve. After 2 years with the Brewers he was on the AL champion Royals last season. You may remember them. I’m not sold on his arm out in LF. In fact, “noodle arm” is a term I’ve used to describe him on multiple occasions throughout spring training. But he’s not here for his defense. Aoki rarely strikes out and can be a key if he shoots the gap towards triples alley. If he does that, he made lead the league in triples this season.

Will he stay healthy? That’s the question Giants fans everywhere are asking. I can’t predict that. No one can. All I know is if Pagan stays upright he solidifies the CF position. It’s his 10th year in the league and with the money the Giants shelled out after 2012 you can only hope he’ll stay on the field. Bochy is gonna try to keep Pagan in the middle of the lineup and if he can produce it will be a welcome change from the last 2 seasons. Pagan is far from the guy that led MLB with 15 triples back in 2012.

Gregor Blanco is super utility man in Giants land. He was the starting LF for the 2012 champs and the starting CF in 2014. This season he starts out in RF because of the injury to Pence. As long as Bochy keeps him down in the order he should be fine. He’s proven over time he’s no leadoff hitter. The fact that he only drew 25 walks last season while playing 146 games is concerning. Here’s to hoping Aoki can handle the leadoff role because I’m not sure Giants fans can take another season with Blanco at the top.

The other new guy on the club. He’s replacing that chubby guy that used to be the regular 3rd baseman. I can’t remember his name, maybe you can. McGehee was acquired in the offseason via trade. He’s coming off a decent season in Miami after spending the previous season in Japan. His power numbers haven’t been high so we don’t really know what to expect. McGehee led the NL in grounding in to double plays last year so he seems to defy the Bochy “keep the line moving” mentality. Truthfully I don’t know what to expect from him and I think neither do the Giants. If McGehee can shoot a gap and keep the runners moving he can be an asset.

He’s handsome, he has great hair, and he’s smooth at the shortstop position. Does that equate to results? Well it has the last 3 seasons. Crawford makes the hard plays look easy and every pitcher feels comfortable with him out there. Last year Crawford killed left handers and I don’t see that changing anytime soon. If Joe Panik struggles I can see Craw taking over the 2 spot in the lineup. This is the season he finally cracks a .250 batting average as a hitter.

Do we truly know what to expect from Joe Panik? Yes he came on at the end of last season and stepped in as a solid 2nd hitter. He’s going to start the season in the same role. Bochy seems to like having the 2nd baseman hit 2nd a la Freddy Sanchez and Marco Scutaro. Panik came on at the end of spring training and looks totally comfortable in his role. I look for him to have a good year and continue to grow in to a solid major leaguer. Panik should be part of the core for years to come.

Brandon Belt is entering his 5th year in the league and the hope is that he can stay healthy this season. Frankly, I don’t see why that can’t happen. As long as his teammates don’t throw balls at his head he should be ok. Belt broke out at the beginning of last season by homering in every park the Giants played in. He also hit a kind of important home run against the Nats in the NLDS. I look for him to have a breakout year during his age 27 season. It wouldn’t surprise me a bit if Belt leads the team in HR’s and RBI’s in 2015.

What can I say? He’s Buster freakin Posey. The man won the rookie of the year in 2010 and the NL MVP in 2012. Last year he contended for another MVP award while guiding a pitching staff that was in flux all season. Forget the fact he was only a singles hitter during the playoffs last year. He’s Buster freakin Posey! He’ll be fine. He’s a career .308 hitter that may not have even reached his full potential. If you need me to give you reasons as to why Buster Posey is a stud, you haven’t been watching baseball the last 5 years.

Pence will be starting the season on the DL. I threw him in here because he is a starter once he comes back. He brings not only a consistent hitter to the club but also a great presence in the clubhouse. The whole team seems to feed off his energy. It’s not a mistake that he was the one that fired up the troops back in 2012. We can expect him to come back from the broken forearm and compete like he always has. I’m not worried about Pence and neither are you. He and Buster are probably the only 2 players in the lineup we know what to expect from. Pence is just a great man and Giants fans will over him forever. It’s going to take a horrible season for fans to turn on him, and I’m not even sure that will do it. When he comes back Pence will continue to be the heart and soul of the team.

So that’s all I have on the starters. I know, it’s once again that hard hitting analysis that you’ve come to expect from me. But let’s be honest, none of us knows what’s going to happen this season, we just hope for the best.