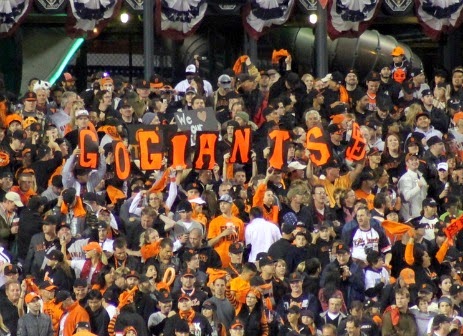 I hate those words.

Well, I hate those words right now. If it was any other team and not the San Francisco Giants, I would be over the moon for a World Series Game 7.

It's not that the Giants can't win Game 7. They absolutely can. It's just all the angst, pressure, anxiety, and general barfiness are ratcheted up a notch.

I was a mess in the time leading up to the Wild Card game. Winner-take-all games do not sit well with me. It doesn't matter who the better team is, anything can happen.

It's not like knowing ahead of time that things would be OK on days Madison Bumgarner started.

The Giants are a confident bunch. We already knew that. They have experience and from everything they said after Game 6 they are not worried. Here's a couple quotes from Alex Pavlovic's game story for the San Jose Mercury News. First from manager Bruce Bochy the second from Jake Peavy.

"They're going against the odds -- we've done that before," Bochy said. "You go back to 2012 and look at this postseason. I think a lot of people had us getting beat in the first and second round. This club is so resilient. They're so tough. They'll put this behind them."

"Listen, this bunch doesn't care," Peavy said. "We'll show up tomorrow and find any which way to win."


That's all well and good now. But it's Game 7 and I think you know where I am going with this.

I mentioned the Wild Card coinflip game earlier. Here we are again, but now it's the same, but totally different. Kinda like this is the Pittsburgh game on steroids. This time they are one win away from taking down the whole damn thing, not just trying to get a seat at the table.

I didn't think the Giants would be here. You may have thought that way too. So there's a sense that they are playing with house money and that everything is gravy. Fuck that noise, they made it this far and a championship has always been the goal.

I may reflect back if they lose and appreciate it, but right now all I want is to see them hoist the trophy.

So go do whatever it is you need to do to try and calm the nerves before 5:07 PT tomorrow night. There are plenty of us out here doing our thing too. I'll be wearing a hole in my carpet and drinking too much coffee until then.

Boy, I sure picked a bad day to quit drinking.