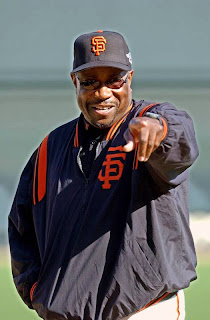 I didn't want to go here. I tried so hard not to pick Dusty. I was being totally subjective when it came to managers, then I really looked in to the candidates. Scary as it seems, Dusty landed in my top 3. There were so many times during his tenure in San Francisco that I disagreed with Dusty. But then there were players and teams that responded to him. So I am trying to put my feelings aside. I don't really like Dusty anymore. He waited too long to bring in Robb Nen in Game 6, he started Salomon fucking Torres on the last day in 1993, and then ruined more arms in Chicago. There were times though that we all loved Dusty and the job he was doing. So I am remembering those times, and how good the Giants were during that stretch of time.


I was surprised to look back and see that the Giants only won 2 division titles under Dusty Baker. In 2002, when they made it to the World Series, the Giants were a Wild Card team. The reason i put Dusty here really is the fact that he took time to form a contender, and then was in the thick of it for 6 years. After the amazing year that was 1993 and 103 wins the Giants fell off for a bit. They didn't win more than 68 games during the next 3 seasons. In 1997 Dusty finally had a team that responded well and started contending every year. He was the Manager of the Year 3 different times. From 1997-2002 under Dusty Baker the Giants either made the playoffs or were eliminated in the final weekend every season but one. He didn't win a title, but was a part of a rebirth of baseball in San Francisco. 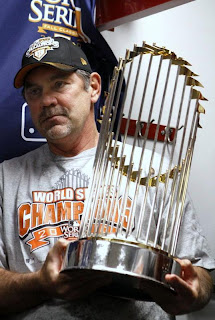 I know it hasn't been all that long, but Bruce Bochy has almost climbed to the mountain top. I know McGraw was legendary, but if Bochy has 5 more years like the last few, he will be at the top of this list. But for now, with two recently won titles, Boch will have to settle for 2nd. Let's be honest, the Giants have never been the most talented team under Bochy. No one would look at the roster and declare them "paper" champions. But Bruce Bochy has known how to put his parts in the right places and it has paid off. I didn't think much of him when the Giants got him. I'm glad he's been more than expected.

When Bruce Bochy took over in 2007 he was saddled with Bonds and the home run record. He knew it, took it like a good soldier, and waited. It was after Barry had left that Bochy built his machine. It has all depended on pitching, and Bruce is a master at using his staff. He knows which starters to ride with, and which bullpen guys to insert. It really is fun to watch. Having Buster Posey has been Bochy's best friend. He has an extension of himself on the field. Bruce Bochy has won 2 of the last 3 World Series titles as manager of the Giants. He might have 4 or 5 total when it is all said and done. 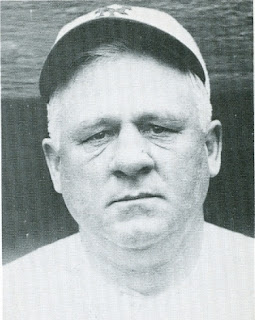 This was another one of those no brainers. Ask me again in 10 years, it might be different. Anyway, John McGraw was New York Giants baseball for a long time. He is second only to Connie Mack in seasons as a Manager. McGraw had a record of 2583-1790 for New York. He brought the Giants to the World Series in 3 different decades. He had the unfortunate nickname of "Little Napoleon".

Under John McGraw the Giants won 10 pennants and finished second 11 other times. He won 3 World Series titles. His first was 1905 with Christy Mathewson and his 3 shutouts. The last two championships came in back to back years. The New York Giants won it all in 1921 and 1922. Right before Ruth and Gehrig took over. They did win 4 straight pennants during that time. The Giants also made the World Series in three straight back in 1911-13. They lost all 3. Overall McGraw was 3-6 in World Series appearances. John McGraw was elected to the Hall of Fame in 1937 by the veterans committee.

As a quick personal aside, thanks for reading these top 3's. I hope I introduced some players unknown and sparked debate about others. Click the links above this for any of the other positions. Come on back for more baseball in the future.