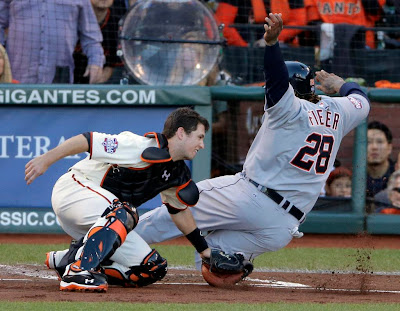 We've seen this happen before. These games, the close well pitched game. The one that turns on a fielding play or even a double play groundout. The San Francisco Giants have played this game many times. It could have been an April night against the Padres. An August game against a good pitcher. This used to be the norm. The Giants have been spoiling their fans with blowouts and home run parties. Tonight, was the return to Torture.

Madison Bumgarner never seemed to let the moment get to him. He pitched like a man that has been there before. He had "it", whatever "it" is. It reminds me of a young Tom Glavine or Andy Pettitte start. Seven shutout innings to go with only 2 hits and 8 K's. He obviously figured out what was wrong. Couldn't have come at a better time. Was wonderful to watch and bodes well for the future.

Manufacturing runs and scoring without a hit has been a staple of this team. They did it in Game 3 against the Reds. The difference this time is they also swung the bats. The amount of pitches the lineup continues to make the Tiger starters throw has been impressive. Fister threw 114 pitches. The Giants made contact with 50 pitches by my count. They make you work.

The first run was started off with a great AB by Pence. Throughout the 7th the Giant hitters forced the Tigers to make pitches. Blanco's bunt was perfect. Kenny Lofton was probably smiling somewhere. Crawford's double play grounder was huge. The Tigers played double play depth to prevent the big inning, and they did. But their bats just couldn't get it going.

Santiago Casilla, and Sergio Romo. Can't script a bullpen's work better. They both came in, did their job, with no frills. It was just a matter of beating each batter with each pitch. Bochy continues to use his relievers better than his counterparts, and is a huge reason the Giants are up 2 games. I applaud him for going to LHP to start both games at AT&T.

Scutaro's play on the relay was Jeteresque. Defense has continued to give the Giants the upper hand. It should continue in Detroit's yard. It will be chilly and play big, just like home. Blanco, Belt, and Crawford have shown that they have gloves that are truly rally-killers.

Tonight we were reminded that the Giants know how to win every way possible. Torture got to visit the bay one last time. It was spectacular. The way this team performs, the best may be yet to come.