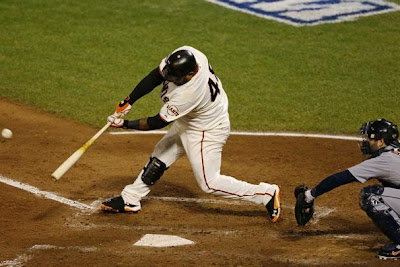 The 108th World Series started off with something never seen before. Pablo Sandoval connected for 3 home runs in his first 3 at bats tonight. He will, and deservedly so, get all the press tonight. He had the big swings , and will now stand with Ruth (twice), Reggie, and Pujols, as the only players to ever have 3 HR’s in one World Series game. He tacked on a single in the 7th for good measure as well. His 13 total bases ranks 2nd all time for one game, behind only Albert’s 14 TB in his 3 homer game last year. Pablo had one less PA.

The top four hitters in the Giants lineup went 10 for 16. None of the hits were cheap. Even Pagan’s double off the third base bag was solid contact. If it misses the bag, he’s on first. Cabrera did not charge that and would not have made the play. Both Angel and Marco had quality at bats in front of the Panda tonight. They did their job as table setters by getting on base, but the overwhelming amount of pitches they saw helped the rest of the lineup.
Angel Pagan saw 22 pitches in his first 3 trips to the plate. He fouled 14 of them off. Verlander was forced to work, and show his stuff for Giants watching from the 3rd base dugout. Scutaro continued to stay locked in and take what pitchers are giving him. He saw 8 pitches after  Pagan’s double to set up Panda for his 2nd home run.
What can you say about Buster too? He seemed to have his protection hitting in front of him instead of behind him (Pence 0-4 3K’s). When he dumped an inside fastball in to RF in the 7th, it was the eye and stroke of a batting champ. His heady play in the 4th to tag Young out and fire to 2nd was what you expect from a leader.
Gregor Blanco was a force in LF tonight. He dove all over the place to snare liners.
The most impressive pitching of the night belonged to Timmy. The disappearing sliders and change ups have returned.  He has somehow channeled his starts from his Cy Young seasons into relief appearances in the postseason. Unreal numbers too. 2.1 innings 32 pitches 20 Strikes 5K’s, all swinging. Only 1 hard hit ball. No hits, no runners. Nothing.
Did we see Verlander struggling like this? No. Do the Giants capitailize whenever given a chance? Always. Even Barry Zito chipped in again with a run scoring hit off the seemingly lost Detroit starter.
Whatever the boys by the bay are doing it is working. I don’t know if it’s because of clubhouse speeches, salutes, bows & arrows, or Arabian Horses. Once again they showed us what ballplayers can do when they keep the line moving and put the ball in play. Especially when they do it with 2 outs. 1 down, 3 to go. If Bumgarner is fixed, what great joy is Game 2 going to bring from that madhouse at AT&T.
Strap in, we just started this series.