It could be today. 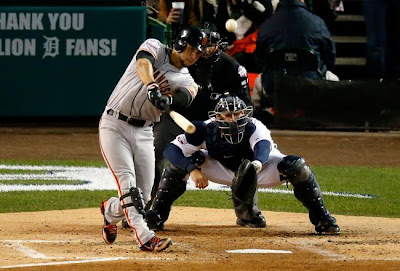 Well here we are. One game away from the San Francisco Giants winning another World Series. I had to sit here for a minute after I wrote that first line to let it sink in. There's no underdog story to be written. I know there are lots of great stories, the Giants just don't seem like an underdog to me. The players are talented, and play as a team.

The way Game 3 played out was very similar to many games this year. It wasn't quite a scary close game. You just knew the Giants were in control. The way they pitched last night it reminded you of a mid afternoon game that you listen to more than watch. You keep the tv on in the background and tune in at the important parts. But you continue on about housework, cooking, etc. It was a game that once the Giants had a lead, it was over. We've seen it a million times.

Now, they stand on the doorstep of a championship. These past 10 days have been, without question, the best 10 days in the history of the franchise. Every story you've read has the dominating numbers. Timmy's crazy domination as a relief ninja. Or how the Starters are on a roll so great, that Barry Zito has 2 of the victories.

This team isn't storybook. Well Vogey is, but otherwise the Giants really aren't. They really are the combination of all the right things. They pitch, play defense, and hit like it's contagious. I love the fact that Bochy's favorite phrase is "Keep the line moving.", it is what I have always wanted in a Manager. They didn't get here by luck, it was by design.

Consider that this Giants postseason run actually goes down as one of the most dominant of all time. They had a 3 game winning streak, on the road. And after taking a few games to figure out the Cardinals, they overwhelmed them in another 3 straight. Combine that with the 3 so far in the World Series, and you have one helluva team. You don't rip off 6 straight by accident. After Angel Pagan was installed at the leadoff spot, the Giants never lost more than 2 in a row. They have done the same thing in these playoffs. Bochy found his lineup and he likes it. He has done a great job. I am more impressed by him every day.

Hopefully tonight we all get to raise a glass in celebration. Toast the team and organization that has brought winning baseball to San Francisco. I'm thrilled that they did, and I love the ride. If it's not tonight, it's still going to happen. I don't think Detroit can play more than one flawless game to beat the Giants. Because that is what it will take at this point. So I pick the Giants to wrap it up and bring that trophy home. Something like, 5-2.