A Break In The Action 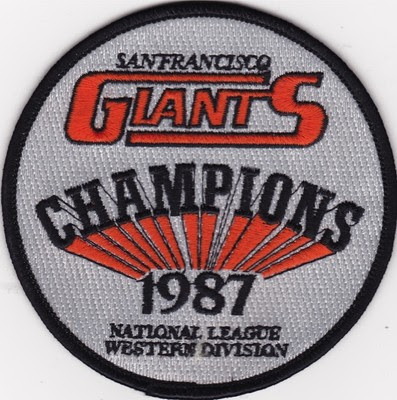 That's when I always figured the Giants would be relevant. Not in my lifetime. I know, I know, we've had our chances. In 1987 i was an 8 year old boy running from one room to another to update my father on the game. They had people over and I was his link to the Giants. I was hooked. The 1984 World Series was the first postseason series I remember. The 1987 NLCS was where I learned to understand. I knew what a hit and run was, could cheer for a double play, and knew the good player's strengths. And that's where I learned heartbreak. I have hated the Cardinals my whole life. Seven game series are rare, and I hung on every pitch. 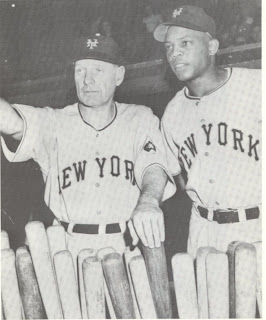 I grew up outside Chicago. My Dad was originally from New York. His childhood was Willie, Mickey, and the Duke. Even though the Giants left he stayed with them. Mays was his guy, and stayed that way. Willie's my guy too, and I'll fight anyone one in the world that disputes he's the greatest of all time. But I digress. I grew up a Giants fan, and all my friends were Cubs fans. They hate the Cards too. But they don't understand. To them it's bred, like hating the Packers. To me, hating St Louis was so much more. They broke my heart. They haven't really done that to the Cubs. 1989 helped, 1998 kinda wiped it away.

But that's the kind of Giants teams I had growing up. Every few years they would get good for a year or two. And then push you off a cliff and make you wonder why you love them so much. Usually you get a few years to lick your wounds. But they come back. In 1989 I never really thought we would beat the big bad A's. It was the Bash Brothers, it was their time. We had 1993. Excitement. Dusty Baker, the new kid on the block gave us hope. Barry Bonds was playing up to his contract and all was right in the world. A new era has begun. 103 wins? Shit, we'll win the World Series. But, no. Fuckin Bobby Cox, and his stable of Pitchers. What does Dusty do on the last day of the season, do or die? He puts in Salomon Torres. A kid. And not a Timmy, or Strasburg kid. Just a kid. And he got shelled by Piazza and the Dodgers and it was over. 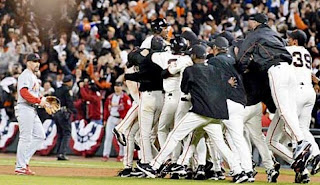 The 2000 NLDS was exciting. New ballpark and all, but that was just a taste. But it was 2002 and the bookend of Dusty Baker's daggers. He did it again. This time he made the playoffs. And beat the damn Cardinals. It was gonna be historic. Barry Bonds in his "2nd" prime. Kenny Lofton's magical bunt. Darren Baker. JT Snow. THIS! This was going to be our champions to remember forever. And then Dusty handed the ball to Russ Ortiz. He assumed too much. And it didn't cost just him. It shredded all of us. To pieces.

2003 was a great year. In my humble opinion I believe before this year, that the 2003 team was our most talented. But we had Felipe and his 8 million pitching changes, and Jose Cruz Jr. To this day whenever I see or hear his name all I think is loser. He didn't just blow a play, he then quit on his team. We had Bonds to help lick the wounds for a few years, but the act was tired. It was fun to watch but it had to end. Bruce Bochy to his credit accommodated Bonds in that last year. He knew there was something else in store for our Giants. He and Sabean knew it better than all of us. Our heartache may soon end. 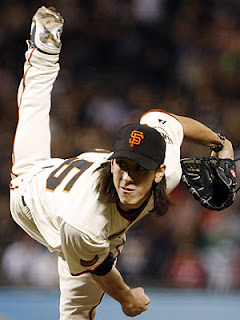 It came in the form of a tiny, skinny, contortionist of a pitcher. He came on and was brilliant. Suddenly you notice, why Matt Cain's already been here like 10 years. The team has a plan. The beautiful ballpark that Giants fans love can be used as an advantage. No need to try to yank balls down the right field line. Let's get pitching. And bless their hearts they tried. I remember being happy about that Zito deal. Usually pitchers coming over from the AL, do better in the NL. They gain a couple of free outs facing the pitcher every time out. There's a DH (ptooey ptooey) in the AL.

It was then that Timmy began to show us the way. He won Cy Young awards in his first two full seasons. He basically laid out how to be a strikeout/flyball pitcher at AT&T. Cain had it figured out too, he just never got run support. As the Giants gathered pitching, they decided to draft one Gerald Dempsey Posey. They knew that if this kid could learn to be a big league catcher, then they had their leader. Before the 2010 season I told my good friend Karen that the Giants were going to the series that year. This was a declaration I had never uttered before a season. I'm not a "this is our year" every year guy. You have to evaluate your team and know their capabilities. This was the first time I could think of that I thought my favorite team might win it all. I was excited, and deservedly so. 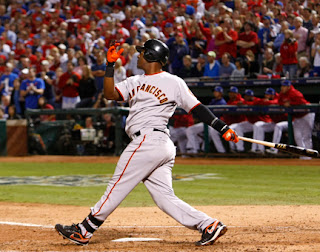 I'm not going to recap the stomach wrenching games of the regular season. Torture was torture, we all lived through it. You could see it take shape in the NLDS. The way the Giants win baseball games is by out pitching you, while continuing to keep the line moving. I call it a carousel. It's why the Panda was loved so early, contact. The more our guys put the ball in play, and the less we let their guys put it in play, the better. So by having high contact guys, the formula should work. And it does. Moves like the trade for pitching help mid season 2010, or the Cody Ross pickup.

The night of November 1, 2010 will be remembered forever. I was in a hotel room in Florida. My dad was back home. We talked after every game. He was always one of those fans that would worry. Do we have enough pitching? Defense? What if the ghost of Edgar Renteria decides to leave? I stayed pretty calm. But that was my role. I believed we finally had a team that year. And the Giants went out and showed everyone how really good baseball gets played. My dad was 6 when the Giants won in 1954. They then left him. He waited until he was 62 to see them win again. All that heartbreak. All that torture. Gone. They won it for his guys. All his guys needed it. For Mays, McCovey, Marichal, Davenport, the Alous, Robby, Will the Thrill, Dravecky, all of them. All the close but not quite for so long. Erased in one stroke. 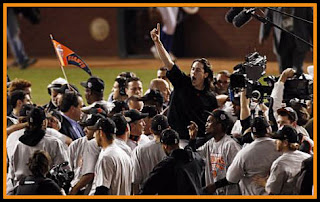 That 2010 team was more like a culmination. A buildup of all Giants history coming out. I'm glad my father got to see it. He deserved it. But sadly, this year it was my dad's turn to leave the Giants. He passed 18 days before this season started. He knew nothing of "Melk Men", our new closer, or Marco Scutaro. He had no idea about freaky Reverend Hunter Pence, a Panda that's lovable again, and the reclamation of Barry Zito. Who I might add my dad also loved the signing 6 years ago. But it's ok. This is a different team. 2010 was to reward our lifelong love affairs with the Giants. To say thank you for being a fan. The best thing my father ever did to me was introduce me to this love. I will forever be in his debt, and watch every game with him in my heart. (and on my back, i wear one of his shirts for luck)

We could be in the midst of history. The Giants are 2 wins away from a title. I have been very calm these first couple of games. I just think we've got the better team. Sabean brings in the right type of player for the organization, both on and off the field, and Bochy moves the pieces around. This goes right on through. We have Buster Posey in his 2nd full season, having an MVP year and leading a staff after breaking his leg such a short time ago. The two Brandons aren't going anywhere. Belt can pick em with the best, and Crawford makes it look easy, the true mark of a good glove man. Pablo has his streaks, but when he finds his swing, he is on. That's good enough at 3rd, as long as he is healthy. Continue to mix and match outfielders that can cover ground, and a couple of hitters that consistently make contact. Now drop in Matt Cain, Tim Lincecum, Madison Bumgarner, Ryan Vogelsong, Sergio Romo, George Kontos, Jeremy Affeldt, Santiago Casilla, and Javier Lopez. If Wilson comes back, thats just stone cold sobering.

We have the tools to compete for the next few years. This is it. The time in my life that the Giants are relevant. They should close this World Series out in 5 or 6 now. I know I sound like an excited Giant fan. But trust me folks, I do have an eye for baseball. I played and umpired a long time. That's for another time. I'm not overly excited. These first 2 games have gone as I suspected they would. And there will be many more to come. It's our turn to have the best in the game. This is our time to have the Baseball world look upon us. Our heartache and sorrow is a distant memory. This team has a future. And I think it has multiple titles in it.